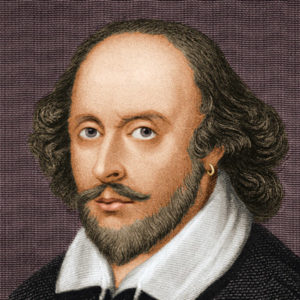 William Shakespeare was a renowned English poet, playwright, and actor born in 1564, in Stratford-upon-Avon. His birthday is most commonly celebrated on 23 April, which is also believed to be the date on which he died in 1616. Shakespeare was a prolific writer during the Elizabethan and Jacobean ages of British theatre (sometimes referred to as the English Renaissance or the Early Modern Period). Shakespeare’s plays are perhaps his most enduring legacy, but they are not the only things he wrote. Shakespeare’s poetry has also remained popular to this day.

Shakespeare’s work includes 38 plays, 2 narrative poems, a collection of 154 sonnets, and other poems as well. No original manuscripts of Shakespeare’s plays are known to exist today, and about half of Shakespeare’s plays are only available to us because a group of actors in his company collected them for publication after his death. These writings were brought together in what is known as the First Folio (‘Folio’ refers to the size of the paper used). It contained 36 of his plays, and none of his poetry. Shakespeare’s legacy is as rich and diverse as his work; his plays have spawned countless adaptations across multiple genres and cultures, and his plays have had an enduring presence on stage and film.

His writings have been compiled in various iterations of The Complete Works of William Shakespeare by different entities, which usually include all of his plays, his sonnets, and his other poems. From Stratford to London and beyond, William Shakespeare was and is one of the most important literary figures of the English language.