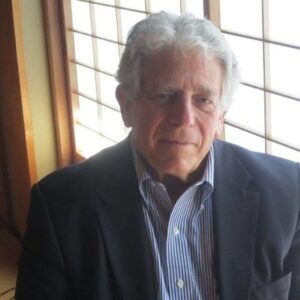 PETER GRILLI is President Emeritus of The Japan Society of Boston and a well-known specialist on Japanese history and culture. Raised in Japan for most of his childhood, he received BA and MA degrees in East Asian Studies from Harvard University. In Tokyo, he also studied at Waseda University and Tokyo University.He worked as Senior Editor at Weatherhill in Tokyo from 1971-75 and Director of the Film, Education, and Performing Arts Programs at the Japan Society of New York, 1975-87. He later headed The Japan Project of PBS (1986-89), and subsequently operated an independent consulting office in New York, specializing on Japan-related media, corporate communications, and cultural exchange. From 1996-2000, he was Director of the Donald Keene Center of Japanese Culture at Columbia University.In 2000, he was invited to become President of the Japan Society of Boston, the oldest of more than 40 Japan-America Societies in the US. In 2003, Mr. Grilli was awarded the Third Class Order of the Sacred Treasure by the Government of Japan in recognition of long service in cultural exchanges between Japan and the U.S. In 2009, he received the Shigemitsu Mamoru Award.Mr. Grilli has written extensively on Japan for international magazines and newspapers, including The New York Times, Wall Street Journal, GEO, Asia Magazine, The Japan Times, and The Japan Quarterly. He is author of the books “FURO: The Japanese Bath” and “JAPAN IN FILM: A Comprehensive Catalogue of Documentary and Theatrical Films on Japan.” As a documentary filmmaker he wrote or co-produced the films: “SHINTO: Nature, Gods and Man in Japan” (1978); “DREAM WINDOW: Reflections on the Japanese Garden” (1992); “TORU TAKEMITSU: Music for the Movies” (1994); and “KUROSAWA” (2001). As producer of Japanese classical and contemporary cultural events, he has been responsible for major U.S.tours of Kabuki, Noh, and Bunraku tours, as well as many other film, musical and theatrical programs from Japan.