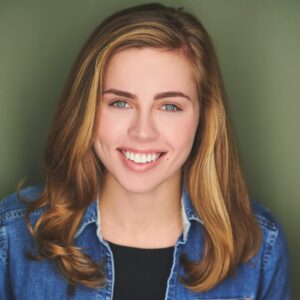 Michaela Elise Fox (“Kiki”) is an emerging musical theatre actor, having graduated from Long Island University, Post, with a BFA in theatre arts with a concentration in musical theatre. Michaela has an eclectic history on stage, having performed in an assortment of new works like The Smog is Rising with the Voyage Theatre Company, experimental pieces like One Flew Over the Cuckoo’s Nest with the Post Theatre Company, and in cabarets like Always a Bridesmaid, directed by Emily Zentis. Kiki is excited to be returning to the stage, even if only virtually, with the Commonwealth Shakespeare Company for their 2021 apprenticeship, after a long year of personal pursuits and making the best of the artistic world we are in!