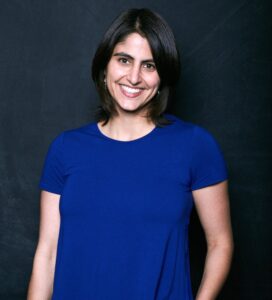 Megan Sandberg-Zakian is an accomplished theater director, author, and facilitator. Based in Boston, she has directed plays all across the country, including at the New York Theatre Workshop, California Shakespeare Theatre, and Capital Repertory Theatre, plus at Boston-area theaters including the Huntington Theatre, Actors Shakespeare Project, and Merrimack Repertory Theater, among many others. Her productions have received both Eliot Norton and IRNE awards. Megan is co-founder of Maia Directors, a consulting group for artists and organizations engaging with stories from the Middle East, North Africa, and South Asia.  Her book, There Must be Happy Endings: On a Theater of Optimism and Honesty, is available from The 3rd Thing Press.

Megan is a graduate of Brown University and holds an MFA in Interdisciplinary Arts from Goddard College.  She has previously served as the Associate Artistic Director of Underground Railway Theater, the Providence Black Repertory Company, and The 52nd Street Project in NYC, and as Director-in-Residence at Merrimack Repertory Theatre.  She is a recipient of the Princess Grace Theater Award and the TCG Future Leaders fellowship.