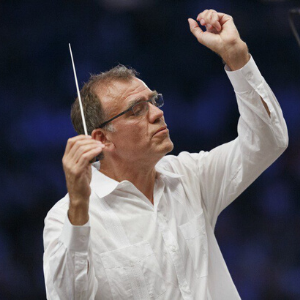 Christopher Wilkins was appointed Music Director of the Boston Landmarks Orchestra in the spring of 2011. Since then he has reaffirmed founder Charles Ansbacher’s vision of making great music accessible to the whole community.

Mr. Wilkins has led the development of programs with an emphasis on inclusive programming and collaborative work. Collaborations have included regular performances with Commonwealth Shakespeare Company, Boston Lyric Opera, the New England Spiritual Ensemble, and Inquilinos Boricuas en Acción (IBA), among many others. He has also helped develop the orchestra’s Breaking Down Barriers initiative, which makes accessibility a priority in all aspects of the organization’s activities.

Mr. Wilkins also serves as Music Director of the Akron Symphony. Recent major projects in Akron have included fully staged performances of Porgy and Bess, The Rite of Spring, Titanic,South Pacific, and A Midsummer’s Night’s Dream. The orchestra’s community initiatives have recently been awarded a major grant from the Knight Foundation. That funding will support community-oriented programming and collaborative projects over a 5-year period.

As a guest conductor, Mr. Wilkins has appeared with many of the leading orchestras of the United States, including those of Chicago, Cincinnati, Cleveland, Dallas, Detroit, Houston, Indianapolis, Los Angeles, Pittsburgh, and San Francisco. He has also appeared overseas, with regular concerts in New Zealand, Latin America, Spain and the UK.

Previously he served as Music Director of the Orlando Philharmonic, the San Antonio Symphony and the Colorado Springs Symphony. He is currently Artistic Advisor to the Opera Theatre of the Rockies in Colorado Springs. During his tenure in San Antonio, he and the orchestra received six programming awards from ASCAP, including the first-ever Morton Gould Award for creative programming. He also served as Resident Conductor of the Youth Orchestra of the Americas, assisting in the formation of the orchestra in its inaugural season, and leading it on tours throughout the Americas.

Mr. Wilkins was winner of the Seaver/NEA Award in 1992. He served as associate conductor of the Utah Symphony, assisting Joseph Silverstein; assistant conductor of the Cleveland Orchestra under Christoph von Dohnányi; conducting assistant with the Oregon Symphony under James DePreist; and was a conducting fellow at Tanglewood.

Born in Boston, Mr. Wilkins earned his bachelor’s degree from Harvard College in 1978. He studied with Otto-Werner Mueller at Yale University, receiving his master of music degree in 1981, and in 1979 attended the Hochschule der Künste in West Berlin as a recipient of the John Knowles Paine traveling fellowship, awarded by the Harvard music department. As an oboist, he performed with many ensembles in the Boston area, including the Berkshire Music Center Orchestra at Tanglewood, and the Boston Philharmonic under Benjamin Zander.