Free Shakespeare on the Common 2022: Much Ado About Nothing 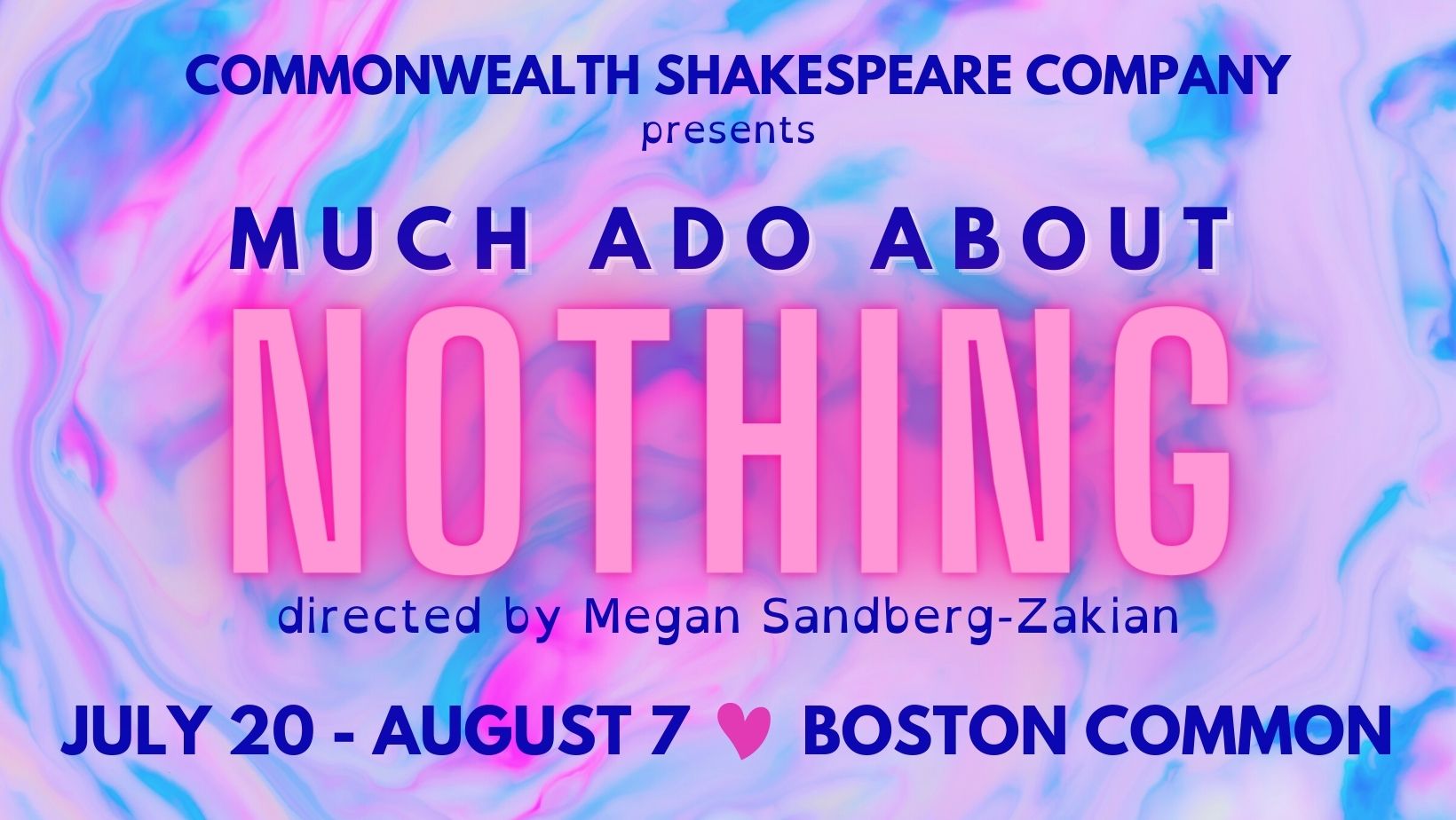 Free Shakespeare on the Common 2022:

Much Ado About Nothing

Boston, MA​ — Boston, MA — Commonwealth Shakespeare Company (CSC) and Artistic Director Steven Maler are pleased to announce the return of Free Shakespeare on the Common in the summer of 2022 – William Shakespeare’s Much Ado About Nothing, directed by Megan Sandberg-Zakian. Performances will begin on The Boston Common on Wednesday, July 20 at 8PM (with press opening on Wednesday, July 27 at 8PM) and end on Sunday, August 7.

Much Ado About Nothing is one of Shakespeare’s most popular and frequently performed plays. The plot revolves around two couples — witty Beatrice and Benedick, who publicly proclaim their disdain for each other but fall madly in love; and naive Hero and Claudio, who fall quickly in love only to be thwarted and then reunited (in both cases, with a bit of help from their friends). But it’s more than just a comedic romp. The play tackles serious themes too: trust and betrayal, power and privilege, gendered expectations around chastity and violence. This is a comedy entangled with a tragedy, where love and justice nevertheless manage to prevail with vigorous joy — a perfect play for our uncertain times.

Much Ado About Nothing was first performed in 1612 in London.  CSC has performed the play once before, in 2004 on the Boston Common.

“I’m delighted that Commonwealth Shakespeare will continue the beloved tradition of Shakespeare on the Common for a 26th season!” said Boston Mayor Michelle Wu. “We’re lucky to have an active, vibrant arts community in our City, and organizations like CSC that help break barriers and expand access to live theater. I look forward to attending this summer’s production, and I encourage all of Boston to support and enjoy our amazing theater scene.”

Steven Maler, Founding Artistic Director of Commonwealth Shakespeare Company stated: “Much Ado is a wonderful play, joyful, funny, and accessible to all audiences. But it also deals with larger issues involved in navigating relationships, which makes the play very relevant to contemporary audiences. We are thrilled to welcome director Megan Sandberg-Zakian, an accomplished artist who will be bringing her unique style and vision to the play.”

Megan Sandberg-Zakian commented: “I am so thrilled to join CSC for my favorite Boston summer tradition of Shakespeare on the Common, and especially to be helming Much Ado About Nothing. One of Shakespeare’s most beloved comedies, it gives us a community emerging from a time of war into an uneasy peace — where there is plenty of feasting and dancing, but where trust is fragile and trading insults feels safer than intimacy.”

Megan Sandberg-Zakian is a theater director, author, and facilitator. Based in Boston, she has directed at Boston-area theaters including most recently Mr. Parent at the Lyric Stage, as well as at the Huntington Theatre, Actors’ Shakespeare Project, and Merrimack Repertory Theatre, among many others. Her productions have received both Eliot Norton and IRNE awards. She has directed plays all across the country, including at the New York Theatre Workshop, Cal Shakes, and Capital Repertory Theatre. Megan is co-founder of Maia Directors, a consulting group for artists and organizations engaging with stories from the Middle East, North Africa, and South Asia.  Her book, There Must be Happy Endings: On a Theater of Optimism and Honesty, is available from the 3rd Thing Press.  Megan is a graduate of Brown University and holds an MFA in Interdisciplinary Arts from Goddard College.  She has previously served as the Associate Artistic Director of Underground Railway Theater, the Providence Black Repertory Company, and the 52nd Street Project in NYC, and as Director-in-Residence at Merrimack Repertory Theatre.  She is a recipient of the Princess Grace Theater Award

Performances of Much Ado will take place at the Parkman Bandstand on the Boston Common and are FREE of charge. Audience members can bring blankets or chairs, or can rent chairs on site for $10, and are permitted to bring modest food items to consume at the show.

Depending on the Covid situation in the spring/summer, we may institute a pre-reservation system to restrict crowd size and promote social distancing. We continue to closely monitor the pandemic and will take appropriate steps on masking and social distancing if required.

Commonwealth Shakespeare Company (CSC), best known for its annual free performances on Boston Common, is a non-profit theater organization founded in 1996, dedicated to artistic excellence, accessibility, and education. CSC’s Free Shakespeare on the Common has served over one million audience members over its 25-year history and has become a beloved summer tradition enjoyed by more than 50,000 people annually. After a hiatus in 2020 because of the Covid pandemic, CSC presented The Tempest on Boston Common in the summer of 2021.

In addition to its live theatre productions, CSC has also presented a variety of virtual programs, most particularly in the past two years. The company also runs the CSC Academy, which provides training programs and performing opportunities for early-career actors, and Stage2, which provides education programs for middle and high school students and educators. For more information visit commshakes.org.