FREE Shakespeare on the Common

We are thrilled to announce the Company’s plans to return to live performance this summer with our 25th anniversary production of Free Shakespeare on the Common.

The Tempest, Shakespeare’s final play, transports the audience to a mysterious and enchanting island. In this tale of magic, betrayal, revenge, and family, the wise and powerful Prospero struggles to maintain the world he’s created as order is thrown off balance by those around him: his curious daughter, Miranda; a man who’s just washed ashore, Ferdinand; the half human, half monster, Caliban; two fools, Stephano and Trinculo; and the mystical spirit of the air, Ariel, among many others. With elements of tragedy and comedy, this “brave new world” is a charming escape to revel in under the stars for the 25th production of Free Shakespeare on the Common. 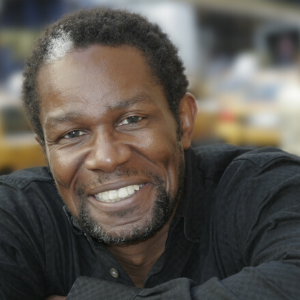 With the safety of our artists, staff, and audiences at the forefront of decision-making, there will be a number or adjustments to this year’s offering. The production will be streamlined to allow for an intermission-less performance. In addition, audience size will be limited according to the most updated state and city guidelines on capacity and social distancing. Audience members (over the age of 2) will also be required to remain masked while on-site. The production will remain free, but due to expected capacity constraints, attendees will be asked to register ahead of time. Registration will open the week of June 21st.

Further information will be announced in the near future as plans develop. 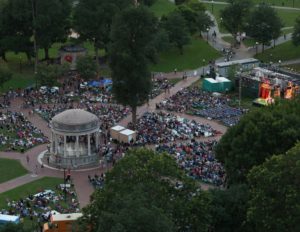 Now entering its 25th season, CSC’s Shakespeare on the Common has become an annual Boston tradition, modeled along the lines of “Shakespeare in the Park” in Central Park and the many other free outdoor summer Shakespeare events throughout the country.

Beginning in the summer of 1996, CSC Founding Artistic Director, Steven Maler collaborated with the City of Boston, the Boston Parks and Recreation Department, and the Mayor’s Office for Cultural Affairs to present a free outdoor production of A Midsummer Night’s Dream in Copley Square.  This event was described by Ed Siegel of the Boston Globe as “fully engaging, with one of the most diverse audiences ever seen in Boston.” The production was chosen as one of the top ten theatrical events of 1996 by the Boston Globe, and Mr. Maler received the Eliot Norton Award for his outstanding direction.  Carolyn Clay of the Boston Phoenix wrote, “how proud it is for Boston to finally offer free Shakespeare.”

Following the success of its first production, CSC presented Romeo & Juliet at the newly renovated Parkman Bandstand on Boston Common in August of 1997. Performing annually at the Parkman Bandstand — centrally located, handicapped-accessible and accessible to all by public transportation — CSC has become one of Boston’s most attended annual arts events.  Each summer CSC welcomes approximately upwards of 50,000 people to our shows on the Boston Common, and over the past 25 years CSC has performed for over 1 million audience members.

Free Shakespeare on the Common is possible thanks to the support of friends like you. There are a number of ways to support CSC. Donations will be collected on the Common or you can also CLICK HERE.

This program is supported in part by a grant from the Boston Cultural Council and administered by the Mayor’s Office of Arts and Culture.

This year’s production will remain free, but due to expected capacity constraints, attendees will be asked to register ahead of time. Registration will open the week of June 21st.  Please continue to check this page and our social media for further updates.

Commonwealth Shakespeare Company is committed to providing equal access to Free Shakespeare on the Common through its access and inclusion program.  Our staff is equipped to assist patrons of all abilities and we look forward to announcing dates and services for this year’s production soon.

As with all of our programming, we encourage you to let us know about any disability-related accommodations that you need in order to participate. Please reach out to us at audienceservices@commshakes.org with your requests, or to let us know how we’re doing in our efforts to make all of our work engaging and accessible to all audiences.

If you are traveling via the MBTA, there are several stations located within steps of the Boston Common.